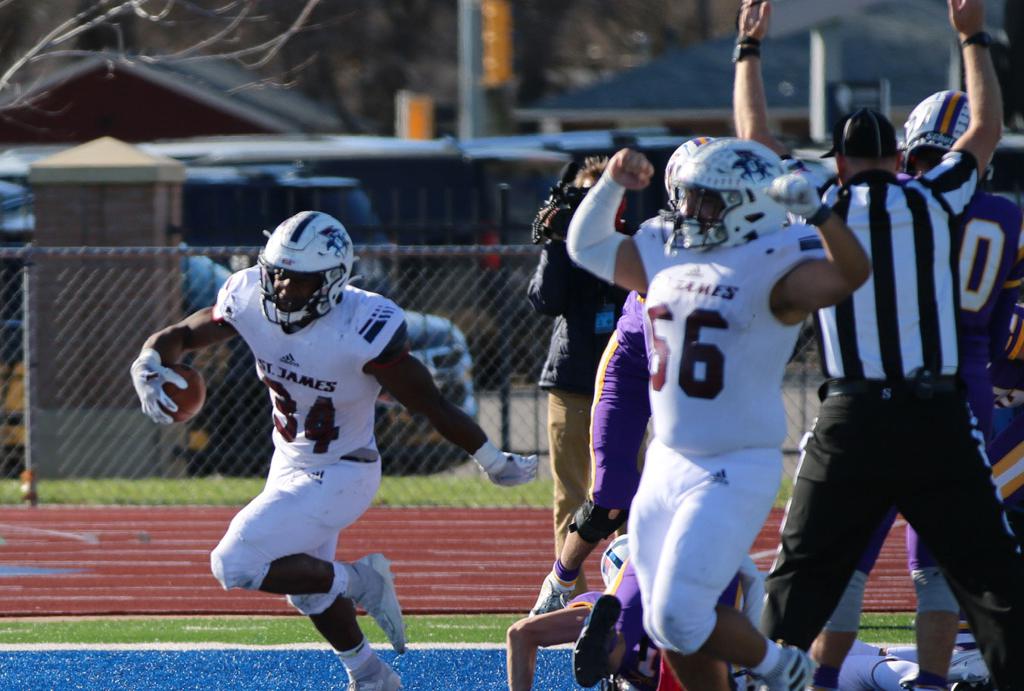 La'James White scored one of his 5 TDs in St. James 56-34 win in the Class 4A title game. (Photo: Bays Creek Photo/Jason Burritt)

The trip to St. James first state football championship was a bit longer than planned, but well worth it.

The Thunder opened up the offense in blowing out Arkansas City, 56-34, in the Class 4A title game, which was relocated from originally Saturday in Topeka, to Friday in Hutchinson.

After stopping Bishop Miege's six-year title run last week, St. James looked to be the favorite against Ark City (6-6). But it was the Bulldogs who held a 14-13 lead in the second quarter, and just intercepted the Thunder with the ball at midfield.

But St. James (8-4) stopped the Ark City drive, then star running back La'James White broke off the second of his five touchdowns with a 67-yard TD run. St. James led, 21-14, after the two-point conversion.

On the ensuing possession, ACHS fumbled the ball to set up a short SJA drive, capped by quarterback Dakota Burritt's 1-yard TD scamper for a 28-14 lead with just 3:28 before half.

Lightning struck again for Ark City with another fumble to give the Thunder short field. White didn't hesitate, taking the next play to the house for a 22-yard score and suddenly St. James led, 35-14.

The Bulldogs countered before half on a Welch's TD run for a 35-21 deficit at intermission. But White scampered for touchdown runs of 83 and 1 yard, followed by Burritt's second TD pass, this time to Hayes Manning for 31 yards. The latter was St. James third unanswered score, and a 56-21 bulge.

For the game, White racked up 264 rushing yards and 5 TDs. Burritt threw for 170 passing yards and two touchdown passes, including one on the opening drive to Tyler Claiborne. The receiver concluded his season with 93 yards and a score.

La'James White takes a lateral pass in the backfield, crosses the field, and eludes the entire Ark City team to give St. James the lead for good, 21-14, in the second quarter. (Video: Bays Creek Photo/Jason Burritt)