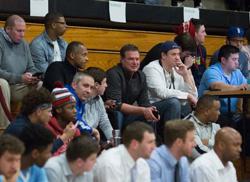 To say the 2016 version of the Best of the Midwest Showcase is one for the ages is still selling it short.

The second annual 810 Varsity Best of the Midwest Showcase has wrapped, and if the event runs 30 more years, it still may never top what many witnessed on Saturday.

Six of the seven games came down to a one-possession game in the final minute. Three of the first four games went overtime, including a triple-overtime thriller won by Free State over Lee's Summit North that included buzzer beaters and big shots to tie the game.

"It was nuts!" said Blue Springs South head coach Jimmy Cain. "The place was packed all afternoon and night. The games were the best day of basketball I can remember being played in Kansas City."

The event rolled deep into the night, as even with built-in time to compensate for games running late, the magnitude of overtimes can't be overcome. But no one complained when the Blue Valley Northwest vs Father Tolton Catholic game tipped at 10:30 pm, and no one was leaving with under a minute left at 11:48 pm.

Many coaches and area basketball pundits have touted it being the best regular-season high school basketball day of hoops in the city's history. And while hard to prove, it would be harder to argue. Six of the seven games were decided by 6 points or less, and came down to the wire.

Close games, 14+ Division I offered players and one of the top three national recruits in the house. Oh yeah, Kansas coach Bill Self and assistant Norm Roberts also were seated at half court.

"This was just a tremendous event for the area for high school basketball. The fans here had to love it," Self said. "There was a lot of talent at here at all levels, and I'm sure it'll continue to grow as the event progresses."

So a few more notes and awards:

A triple overtime game is an automatic winner, especially when its not in futility. Big shots after big shots were nailed, finally capped by Hunter Gudde's game-winner in the third overtime.

They overcame the sound system going out 6 seconds into the music and continued to dance the entire performance in front of a packed house. If anything, this had to be their best dance of the year, and the crowd realized it with a standing ovation after.

So hard to pick a winner. Jordan Barnes of CBC (35 points) and KJ Robinson of Blue Springs South (28 points) lived up to the hype. Zach Thornhill tossed in 31 points. And perhaps Porter's 35 points were expected. But 35 points and 22 points has to take the cake, and certainly didn't let the crowd down with 22 second-half points and electrifying dunks.

Overall, a great event and already planning what's ahead in 2016-17. Hope to see you then!