A year older, Blue Springs is ready for a big season

Blue Springs Returns After Rebuild in '15 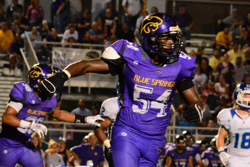 Daniel Parker and Blue Springs are primed for a huge year in 2016. (Photo: bssjaguarfootball.org)

Missouri better have got its shot at Blue Springs last year, because the Wildcat look to be loaded back up again in 2016.

Blue Springs, which won the Missouri Class 6 title in 2012 and 2013, eyes another big year in 2016 with a roster filled with juniors and seniors that took its lumps during a 6-6 campaign, but finished with a five-game winning streak before a season-ending playoff loss at Kickapoo.

“We just hadn’t fielded a team that young before,” recalled BSHS head coach Kelly Donohoe. “After stumbling early, we won 6 of the last 7 and saw the kids growing up before our eyes.”

With a team of sophomores and juniors, the transition year in 2015 looks to lead to big benefits in 2016.

“It was great to go on a strong run at the end with the guys. We went from a season of just finding out who starters were going to be to now having everyone coming back. We feel we’ll have a good football team.”

While Donohoe will lead the Wildcats on and off the field, it’ll be another Donohoe under center for BSHS, Kelly’s son, Chase. Chase Donohoe, a 5-foot-11 junior, will begin the season as the starting quarterback for Blue Springs.

“Chase gives us options in the offense to do what we’re trying to do. He’s very athletic, quick and throws the ball well. He stays calm very, very well – which is a great trait for a quarterback,” coach Donohoe said.

“Since he’s been bee-bopping around field as a kid, always wanted to coach him. He’s always enjoyed playing quarterback.”

Both Donohoes should enjoy the rest of the surrounding offense. In the backfield, a pair of juniors return in Jaylen Ivey (5-foot-10, 200) and Michael Warmack (5-7, 175), younger brother of two-time Simone Award winner and current K-Stater, Dalvin. Ivey notched 593 rushing yards and four touchdowns in split duty in 2015.

“We feel we can have that thunder-and-lightning thing with those two,” touted Donohoe. “Jaylen  is bigger, stronger and can run over or by you. Michael is just like Dalvin, he’s just so quick.”

Up front will be a combo of veterans, talent and size on the offensive line. A pair of seniors in center Spencer Johnson (6-0, 275) and guard Forest Dodge will join junior Daniel Parker, who committed to Mizzou early in the week.

On the outside, returners in seniors Joey Janes and Tyree King (386 receiving yards, 2 TDs) join junior Tre Wheaton, who Donohoe touted “will be very highly recruited when he’s a senior”.

On the defensive side, Parker helps lead the way up front at defensive end, where Mizzou likes him the most. “He’s a high-level guy with a combination of tremendous feet, long arms and aggressive.”

“Our kids understand it starts back in December,” Donohoe said. “All the kids we’re counting on did a nice job all offseason in other sports. Everything is on track for us to be a good football team. We hope our guys stay healthy and have evolved into great leaders and workers.”

While Blue Springs looks poised for another big campaign, Donohoe feels the rest of the Class 6 teams in the area – namely the Suburban Big 7 – will also be improved.

“Our conference is as good as it’s ever been,” hyped Donohoe. “There aren’t any dogs. We have nine bangers in a row on our schedule with our non-con too, but feel we have the kids to handle that. We’ve had a great summer – weight room, camps – everything’s been strong. We’re very excited.”