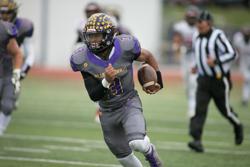 Blue Springs made sure in a rematch with Park Hill with all the stakes on the line, the Wildcats asserted their game early. They also beat the Trojans at their own game too.

The Wildcats utilized a heavy ground attack in beating Park Hill, 34-14, on Saturday in the Class 6 semifinals to advance to its second straight Class 6 state title game, this time against CBC next weekend.

And especially for senior quarterback Chase Donohoe, who was injured midway through last season and watched his teammates - and father, head coach Kelly, from the sideline.

"I was so excited for my teammates and everyone to be able to compete in the championship, but this feels so good to be playing with my dad in my senior year," Chase said. "It's hard to put into word - it doesn't even feel real."

Blue Springs (11-2) had lost earlier in the season as the No. 1 team in the state and Metro at Park Hill, 28-25, in a close game in Parkville. But two months later, the Wildcats asserted their running attack in the first half. Blue Springs opened with a seven-play, 78-yard drive - 67 on the ground, capped by a Caleb Marquez three-yard touchdown to take a 6-0 lead.

Park Hill answered the call once in the game on offense, as after the Trojans stopped a fourth-and-1 attempt at the Blue Springs 39, quarterback Billy Maples immediately hit Payton Stanfield down the right sideline at the 10. Stanfield ran the final 10 yards for a game-tying score, though both teams failed on their PAT attempts to keep the score at 6-6 at 2:22 left in the first quarter.

Blue Springs kept the offense going, as after a 78-yard Bailey touchdown was called back, the Wildcats went 89 yards from their own 11 in 10 plays. On a 3rd-and-12, Chase Donohoe hit Tre Wheaton for a 31-yard strike to convert and land BSHS at the Park Hill 40. A 14-yard Aveion Bailey run, a 7-yard tote by Cade Musser and a 12-yard Marquez run set up BSHS at the 1. Marquez plunged in for a 1-yard touchdown, and a 13-6 lead.

After a three-and-out, Blue Springs took over at midfield at its own 46. On assorted runs from Wheaton, Bailey and Musser, it was Musser who took a counter to the right side and into the end zone for a 7-yard score and a 20-6 edge early in the second quarter. For the game, Blue Springs registered over 250 rushing yards, while Park Hill was held under 100.

"We always know we are run first and that allows us to open up play action and take shots downfield," Chase Donohoe said.  "We didn't run the ball very well in Week 4. We've gotten much better up front from that point, so we were focused on the run game this time."

Park Hill looked to answer as two big passes to standout receiver Ronnie Bell helped fuel a drive to the Blue Springs 20. But senior Azaiah Bello picked off Maples and ended the drive.

Bello helped lock down Bell, who entered the game approaching 1,500 yards while hauling in 20 touchdown receptions, tops in the state. Meanwhile, the pass rush and coverage kept Maples at bay, as he converted just 9 of 26 passes for 181 yards.

While the Trojans had been flourishing on their big-play threats all year, it was Blue Springs who put the nail in the coffin with the deep threat. After both teams exchanged three-and-outs, Blue Springs took over again at midfield with just over a minute left. On third-and-five after a timeout, Donohoe hit Wheaton wide open on the left side at the 20. Wheaton raced into the end zone for a 27-6 staggering lead at :21 left, and an insurmountable halftime lead. Wheaton finished the day with four catches for 95 yards.

"I saw Tre was one-on-one with the defender, and knew right then it would be a touchdown," Chase said. "Tre set him up perfectly. That gave us so momentum going up 21 at half, and we just kept it going from there."

Park Hill couldn't get its offense on track for much of the game. Despite holding Blue Springs scoreless in the third quarter, the Trojans finally got to the 21 with just under 6 minutes left. But a series of penalties from each side ended up leading to a 4th-and-13, and Dorian Clayton eventually was stopped at the 16 to end the threat, still down 27-6.

BSHS blew the game open immediately behind another big play from Bailey, setting up another Marquez touchdown plunge and a 34-6 romp. Marquez finished with three touchdowns. Bailey led the Wildcats with 20 carries for 160 yards, while Musser - who exited the game with a shoulder injury - added 88 total yards and a score.

Park Hill got on the scoreboard again after a long Bell reception, which set up a Bell leaping snare for his 21st touchdown reception of the season. A completion for a two-point conversion rounded out the scoring at 34-14.

The Trojans wrapped a memorable season as co-league champs with Blue Springs and a 10-3 mark. Bell finished 1,594 receiving yards and 21 touchdown receptions - both in the MSHSAA all-time top 10 single-season rankings. Maples concluded with 41 touchdown passes in his final year.

As the rains continued to pour down, Blue Springs players rushed the field as time ran out. The Wildcats makes its seventh state title appearance under head coach Kelly Donohoe and seeks its fifth state championship in the Donohoe era.