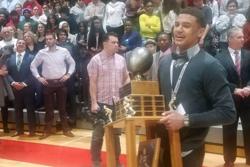 Ronnie Bell completed his lap with the Thomas A. Simone trophy around the Park Hill gym.

The winner of the 35th Annual Thomas A. Simone Memorial Award, given annually to the most outstanding football player in the Kansas City metropolitan area, was Ronnie Bell of Park Hill.  The three other finalists for the Simone Award were Phillip Brooks of Lee’s Summit West, Graham Mertz of Blue Valley North and John Raybourn of Staley.

The Suburban Gold Conference Offensive Player of the Year, Ronnie Bell had one of the most prolific receiving seasons in Missouri history. He caught 89 passes for 1,605 yards and 21 touchdowns, the fourth best total ever in the state. He was also a threat on the ground, scoring three touchdowns on his 15 carries. Bell, a unanimous pick for first-team all-conference receiver, added a punt return touchdown as well for the Class 6 semifinalist Trojans. His coach also called him the best blocking skill position player he’s seen as he tallied 29 pancake blocks on the perimeter. Over the weekend, he was named a first-team all-state wide receiver in Class 6 by the Missouri Football Coaches Association. Bell is also an outstanding player for the Park Hill basketball team, averaging over 14 points per game last year, and last month signed with Missouri State where he will play hoops for the Bears. Bell is the 35th winner of the Simone Award and the first for Park Hill since Jeff Kelso was the inaugural recipient in 1983. 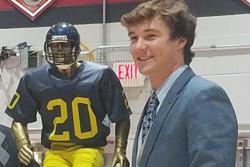 Bishop Miege's Carter Putz became the first Fontana winner from Kansas in the 19 years of the honor.

The winner of the 19th Annual Frank Fontana Award, presented by Blue Cross and Blue Shield of Kanas City and given to the most outstanding small class (MO 1-4, KS 1A4A) football player in the metro, was Carter Putz of Bishop Miege.  The three other finalists for the Fontana Award were Diego Bernard of St. Joseph Lafayette, Tanner Clarkson of Platte County and Amaun Ryan of Center.

Putz crafted a record-shattering career at Bishop Miege, throwing for 9,336 yards and 124 touchdowns, both easily besting the previous top marks in Kansas history. More importantly to Putz, his teams never failed to win the Kansas Class 4-A state title, capping his career with an unbeaten 13-0 championship this year. Overall, he had a record of 37-2 in three years as the starter. Despite the loss of numerous key offensive weapons from last year, Putz threw for 2,844 yards and 38 touchdowns. He also rushed for a career-high 596 yards and 11 touchdowns. A two-sport athlete, Putz will play baseball at the next level for Notre Dame. His Fontana Award win adds to an already impressive collection of football hardware, including 2016 Gatorade and 2017 Topeka Capital Journal Kansas Player of the Year honors, plus numerous all-conference and all-state awards, A two-time finalist for the Fontana Award, he is the first Bishop Miege player to take home the trophy. 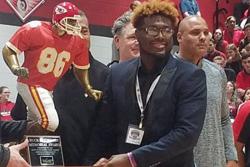 The winner of the 26th Annual Buck Buchanan Memorial Award, presented by the Kansas City Chiefs

Ambassadors and given to the best lineman/linebacker in Missouri’s and Kansas’ top two classes (MO 5-6, KS 5A-6A), was Daniel Parker of Blue Springs.  The three other finalists for the Buchanan Award were Nick Allen of Blue Valley Southwest, Daniel Carson of William Chrisman and Brighton Ramirez of Park Hill.

A finalist for the Buchanan Award last year, Parker took home the trophy this year after a dominant senior season on both sides of the ball. He tallied 16.5 sacks for the Class 6 runner-up Blue Springs Wildcats and 78 tackles overall as a defensive lineman. Missouri coaches last weekend chose Parker as the Defensive Player of the Year in Class 6, a distinction he also earned in the Suburban Gold Conference. Last year, Parker played almost exclusively on the offensive line. He was there again this year and good enough to earn first-team all-conference honors for the second time. But despite his coaching staff’s reluctance to play him both ways, he proved quickly this year he could handle the extra workload and rarely left the field. Parker was a highly sought-after college recruit as well before choosing Missouri over a dozen major conference offers. This is the eighth time Blue Springs has had a Buchanan winner, with Parker joining, among others, two-time winner Elijah Lee as Wildcats to take home the trophy for the metro’s top lineman/linebacker. 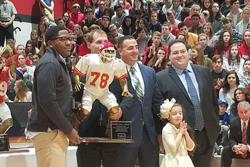 The winner of the 18th Annual Bobby Bell Award, presented by Great Western Bank and given to the best lineman/linebacker in Missouri’s and Kansas’ smallest four classes (MO 1-4, KS 1A-4A), was Michael Smith of Platte County.  The three other finalists for the Bell Award were Dylan Downing of Bishop Miege, Marshall Kellner of De Soto and Nick Kruse of Harrisonville.

The Suburban Blue Conference Defensive Player of the Year, Smith tallied 17.5 sacks as a senior defensive lineman for Platte County, with another 20 quarterback hurries. He had 62 total tackles, 24 solo, 11 tackles for loss and two forced fumbles. He was recently named to the Missouri Coaches First-Team All-State squad in Class 4. Smith helped lead the Pirates all the way to the Class 4 semifinals where they suffered a narrow loss on the road to eventual champ Webb City. In a striking similarity to this year’s Simone Award, Smith is the second player from Platte County to win the Bell Award but the first since Brian Koechner was the first-ever recipient in 2000.

The winner of the 11th Annual Otis Taylor Award, presented by C&C Produce and given to the best tight end/wide receiver in the metro area, was Ronnie Bell of Park Hill.  The three other finalists for the Taylor Award were Dominic Gicinto of Raytown, Jackson Heath of Blue Valley Northwest and Logan Talley of Mill Valley.

Bell joins Evan Boehm as the only players to win two trophies at one Simone Awards ceremony. Boehm took home the Buchanan Award for a second time in 2011, the same year he won the Simone Award as the metro’s most outstanding player. Receivers have occasionally earned a spot as a Simone finalist, but Bell is just the second to win it, joining 1994 winner Eddie Brooks of Blue Springs South. In a sign of the dynamic nature of today’s offenses, Bell this year almost doubled Brooks’ 895 receiving yards from his Simone season.

The Simone Awards were voted on by the member head coaches of the Greater Kansas City Football Coaches Association (GKCFCA) and a 12-member media committee.

The 7th Annual Nathan Stiles Inspiration Award, honoring the memory of the Spring Hill standout football player who died in 2010 after collapsing on the field, was Graham McMorrow of Liberty. McMorrow weighed just 13 ounces at birth and has cerebral palsy as a result. Doctors suggested he would likely never walk or talk. He shattered those expectations and is a member and inspirational heart and soul of the Liberty Blue Jays football team.