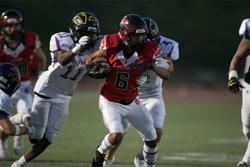 Bell, the standout receiver from Park Hill who reeled off the best receiving season of all-time in Kansas City history, re-opened his recruiting earlier over the weekend. The senior had committed for basketball to Missouri State before the football season, but after ripping off 1,605 receiving yards and 21 scores - both in the Missouri single-season all-time Top 10 and earning the 2017 Simone Award for top Kansas City football player and 810 Varsity Receiver of the Year, Bell had to rethink about his future.

"I've always wanted to play football in college, but the opportunity never presented itself," Bell said. "All along, basketball is great, but I had wished somebody reached out to me to play football. That's what helped me and led me to play as well as I did - to try to earn something."

Bell played more than just 'well' - Bell went on to catch 89 passes for 1,605 yards and 21 touchdowns. The yards finish 7th in Missouri history for a single season, while the touchdowns tie for 9th.

Bell also rushed for 3 touchdowns and scored on a return.

Bell eclipsed the 200-yard mark three times, and caught multiple touchdowns in seven games, while helping Park Hill to the Suburban Gold league title and to the Class 6 semifinals.

After posting on Twitter late last week that he was decommitting from Missouri State, Bell received double digits offers from Division I programs.

"Once I announced that I wasn't going to be playing basketball, it all erupted from there."

But what stunned Bell to disbelief was Michigan contacting him.

"When I first heard from them (via Twitter), I thought 'No way. Someone is messing with me'," Bell recalled. "But when I got on the phone with Coach (Jim) Harbaugh, I thought 'This is really happening'. You can't make this stuff up - it's a legit dream come true and all nothing but good."

After talking with Coach Harbaugh, Bell knew it was an easy decision - even without visiting Ann Arbor, MI. Bell is set for a visit on January 19, 2018.

"It was a no-brainer from them on, especially when considering how storied a program Michigan is in football, but how good they are academically too," Bell said.

The turn of events also made it a no-brainer for holiday gifts for Bell's family.

"My mom bought me a hoodie and brought it home today already. I'm sure she's getting stuff now and hiding it from me already," Bell quipped.

Bell got offers from Illinois, Nebraska and others over the weekend - yet nothing from the area three of K-State, Kansas or Missouri during the season. (K-State did contact Bell over the weekend, but he wasn't offered by the Wildcats).

Had Bell heard from any during the year, when he darted for 226 yards and three scores in the opener, or 208 yards and four touchdowns in August against Lee's Summit, Bell "most definitely would've considered it".

But Bell remained with Missouri State during the season and didn't hear anything, despite 259 yards and three scores on October 6, or the run of the year vs Rockhurst in the district final in November (below). And has nothing but good things to say about MSU.

However, his dad, Aaron, could see all season that football remained the motivator and desire for Ronnie.