Best of the Midwest Showcase - Jan. 16 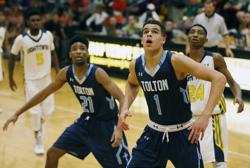 The second annual 810 Varsity Best of the Midwest Showcase tips off at Johnson County Community College on Saturday, January 16, 2016. The all-day event features seven games with schools from Kansas City, St. Louis and Columbia, including Father Tolton Catholic and Michael Porter, a consensus top 3 recruit nationally for the 2017 class. Over the summer, Porter cutting down his list to include Kansas, Mizzou, Duke, Kentucky and other national powers.

“Porter has been a special player that you see once in a lifetime,” said 810 Varsity’s Chad Rader of the 6-foot-8 junior. “Kansas and many others have been recruiting him a long time, and for good reason. He's the most highly regarded player nationally to play in Kansas City in a basketball game since Danny Manning.”

The Best of the Midwest Showcase was organized by 810 Varsity, the high school entity affiliated with Sports Radio 810 WHB, in starting a regional event to Kansas City. Among the matchups, the headliner with Blue Valley Northwest – the top team in Kansas Class 6A vs. Father Tolton Catholic and Porter at 8:30 p.m.

"This is what Kansas City has needed for a long time," said Jimmy Cain, Blue Springs South head coach. "Teams have traveled to play in these events around the country, and now we can stay at home and bring them here."

The inaugural Best of the Midwest Showcase was held last year at Municipal Auditorium, and featured over 12 Division I recruits. This year also features at least 12 players with Division I offers. Among them, KJ Robinson, point guard for defending Missouri Class 5 champion Blue Springs South, which faces 2014 Class 5 champ CBC from St. Louis and two Division I guards.

"We've always looked to challenge our kids and prepare them for the postseason, and this is another event that accomplishes those goals," said Blake Little, head coach of Lee’s Summit.

810 Varsity’s Best of the Midwest Showcase will feature matchups including:

2016 DiRenna favorites: Two favorites for the 2016 DiRenna Award, the award for the top Kansas City area player, will be in action. Blue Springs South’s KJ Robinson, a signee with Nebraska-Omaha, averages over 25 ppg. Ryan Welty, a 6-foot-8 senior forward who led Park Hill South to the 2015 Class 5 title game, posts 19.7 ppg and 10.3 rebounds with numerous Division I offers.

Tickets are $8 for adults, $6 for students, and will serve as an all-day pass to all seven contests.

"The matchups are very exciting with defending champs clashing, potential state champions, players of the year, possible future NCAA and NBA stars and more," Rader said. “You can’t watch a movie today for under $10, but you can watch up to seven basketball games.”

The full schedule below:

Park Hill South will face Olathe North, who advanced to the Kansas Class 6A state tournament in 2015, and return a strong cast as well.

Lee’s Summit, which outlasted Kickapoo, 91-84, in the 2015 Best of the Midwest Showcase, will take on Shawnee Mission North. The Tigers will take on North and Michael and Marcus Weathers, one of the most talented tandems in the area.

What more do you need to say? The nation's top recruit - Michael Porter with offers from KU, Mizzou and nearly every powerhouse in the country - along with 6-foot-9 brother Jontay Porter will face Kansas' No. 1 team in the state - Blue Valley Northwest and its talented cast.

Both teams laced 'em up in the inaugural Best of the Midwest Showcase in 2015, and look to improve upon last year.

Two of the Metro's top returning casts face off in the nightcap. Ryan Welte and the Panthers return after a Class 5 runner-up season. The Eagles come off an appearance in the Kansas Class 6A state tourney. Ryan Welty (20 ppg, 10.5 reb), a 6-foot-8 forward for Park Hill South, stands as one of the area's frontrunners for Player of the Year.

Two of the area's top teams will match up, as Lee's Summit and Blake Spellman return to the event against the duo of Michael and Marcus Weathers for the Indians, fresh off a Kansas Class 6A state tourney berth.

Each program has enjoyed strong success in recent years, and look to take another step forward in 2015-16.